A LEAP INTO THE UNKNOWN 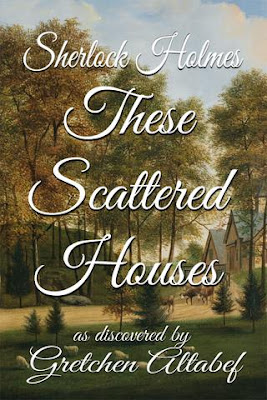 A client forsworn, a threatened town, and a Goliath of unimaginable proportions . . .
Gretchen Altabef has authored her first pastiche novel, “Sherlock Holmes: These Scattered Houses.” Released by MX Publishing, London.

Sherlock Holmes is sixty days away from A. Conan Doyle's "The Adventure of the Empty House." He has survived a three-year vendetta against him by Moriarty’s remaining henchmen. Wounded and bleeding, with Mycroft’s help he clandestinely boards a steamship headed for the Atlantic.
At the close of his great hiatus, Holmes finds sanctuary at Vassar Women’s College. This radical challenge entangles him in the web of a nefarious mystery. Its unraveling involves New York’s most revolutionary residents: Elizabeth Cady Stanton and Susan B. Anthony. To pluck his client from danger, he drafts the twenty-year-old Harry Houdini in outrageous sleight of hand. Four villains embroil the plot. The lives of everyday citizens inexorably rise to heroism. And it all begins when a twelve-year-old girl matches wits with Sherlock Holmes on Market Street.
"Sherlock Holmes: These Scattered Houses" is a daring adventure in the style of Sir Arthur Conan Doyle. As Professor Sigerson the pansophic gentleman of justice, Holmes is confronted by the evil that lurks within the smiling and beautiful countryside.

Available directly from the publisher at MX Publishing.
Amazon USA, Amazon UK, Amazon IT, Amazon DE, Kindle, Goodreads, Barnes and Noble, and Book Depository (they have free delivery worldwide.) Audiobook by Audible.
at July 11, 2019 No comments: Links to this post

A LEAP INTO THE UNKNOWN

Gretchen Altabef
I write Sherlock Holmes Novels and emulate Dr. John Watson's and Sir Arthur Conan Doyle's literary styles as much as I can. The first, "Sherlock Holmes: These Scattered Houses" has been published by MX Publishing, London. It is a breakthrough novel for Holmes and for me. Both a historical novel and murder mystery, solved as only Holmes can. "I could not wish anything better than to be associated with my friend in one of those singular adventures which were the normal condition of his existence." - Dr. Watson (TWIS). A member of the Sherlock Holmes Society of London, The John H. Watson Society, and the Dumpster Divers of Philadelphia artist collective.